Yat Ming, or as is also famous in some markets, Road Signature, has quite a few good models. In the medium range of the scale is the all-time classic Jaguar XJS.

Famously called “Grand father clock” in TopGear, the Jaguar XJS is one of the most famous “old timer” Jags. Yat Ming has a reasonable representation of the car in 1:18th scale.

First a quick look around the real thing. It was made between 1975-1996 and was intended to be the replacement for the iconic E-type. Sadly it was no where near as iconic as the E-type.

It was also struck by a lot of technical issues that made the car very expensive to maintain. On the days it was working though it proved that all was worth it.

The first version had a V12 petrol engine capable of propelling the car from 0 to 60 mph in 7.6 seconds. That was pretty brisk in 1975. Top speed was 143 mph. Later versions had other choices for engines, more power and so on.

In 1991 a facelift version was introduced and in 1994 the 4-liter V12 engine was reworked. Sadly two years later the model was discontinued and replaced with the XK8. Today a decent XJS is worth a respectable amount of money. 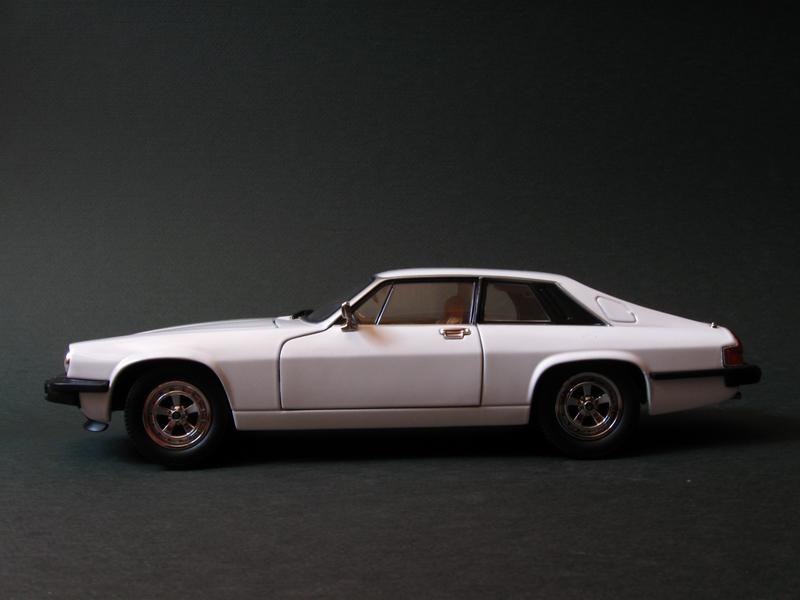 That’s why a diecast model of it is a better choice. First it is cheaper. Second it will allow you to enjoy the looks of the car everywhere. And third, it won’t cover your garage (or in this case display shelf) with oil every other morning. 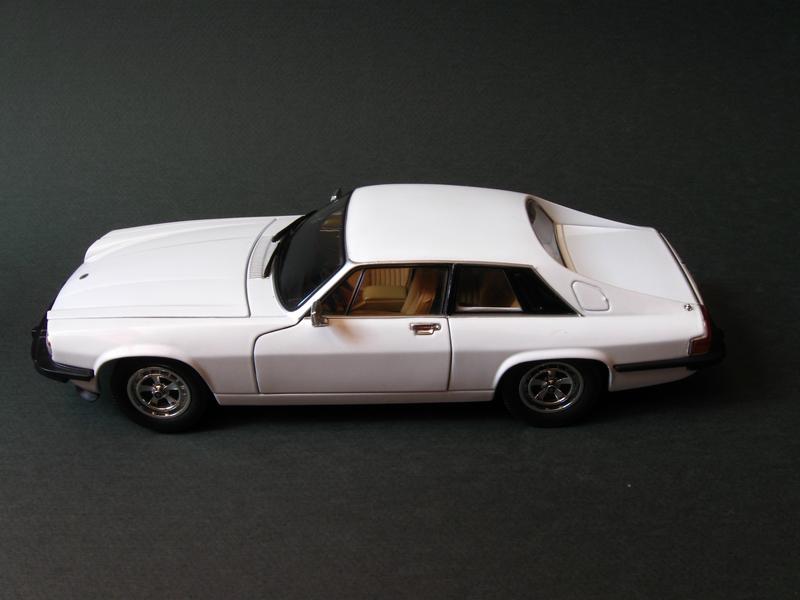 We start with the exterior. The model is slightly bigger than it should be. About 5 mm longer and wider for instance. But overall the stance is right and the slightly bigger dimensions add to the better look of the car. 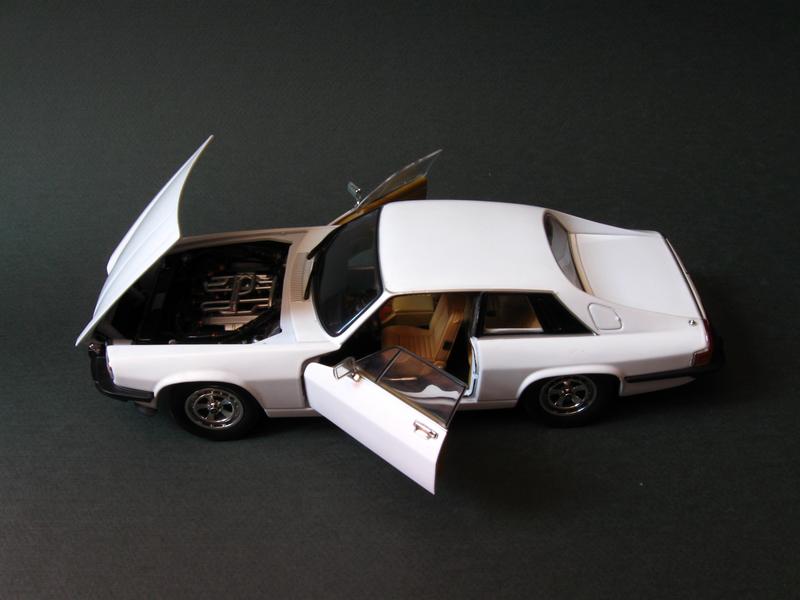 The front and rear bumpers are plastic but bare with no paint. Just normal black plastic. It would have been a lot better if there were some real paint on them even if it’s again black. 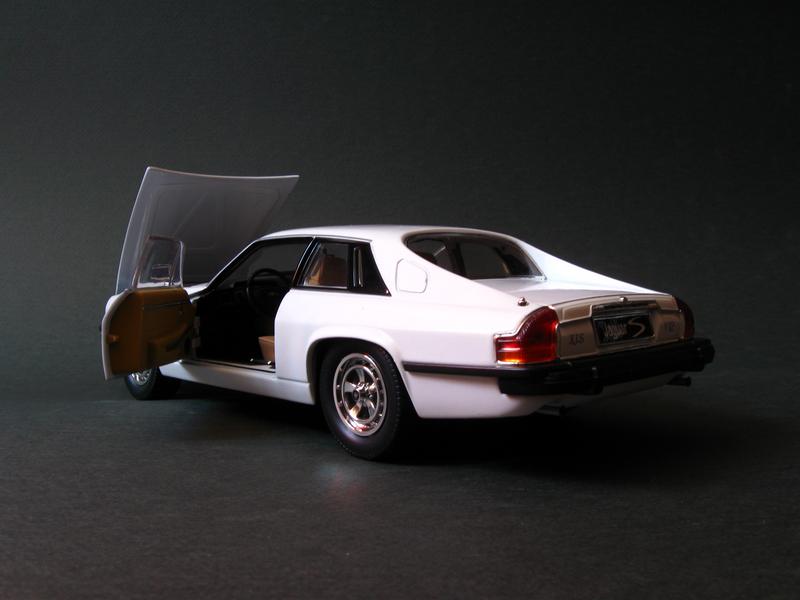 The front headlights are well done. The stubs used for fitting them in place act as bulbs and don’t ruin the look as they do around the back. 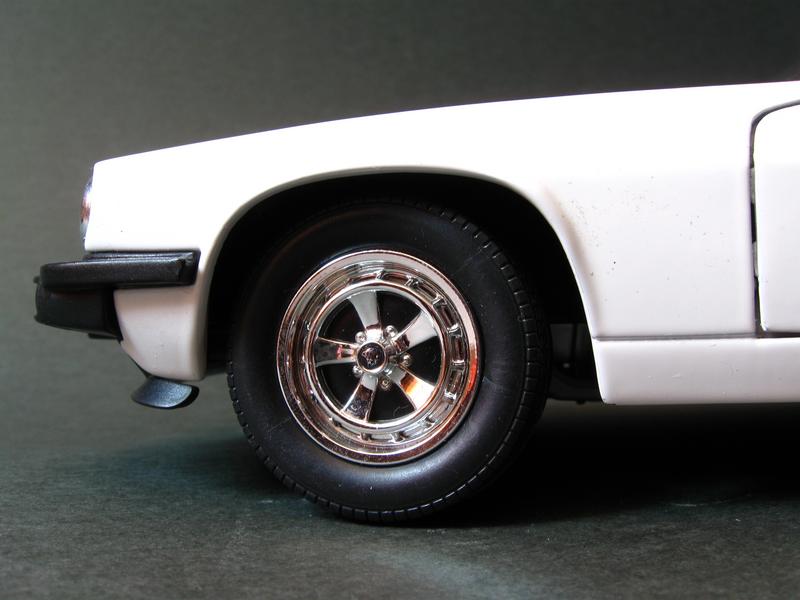 The wheels are nothing special and they aren’t even cut through and are solid in between the spokes. The tires are big and chunky as they were in most cars around the same period. 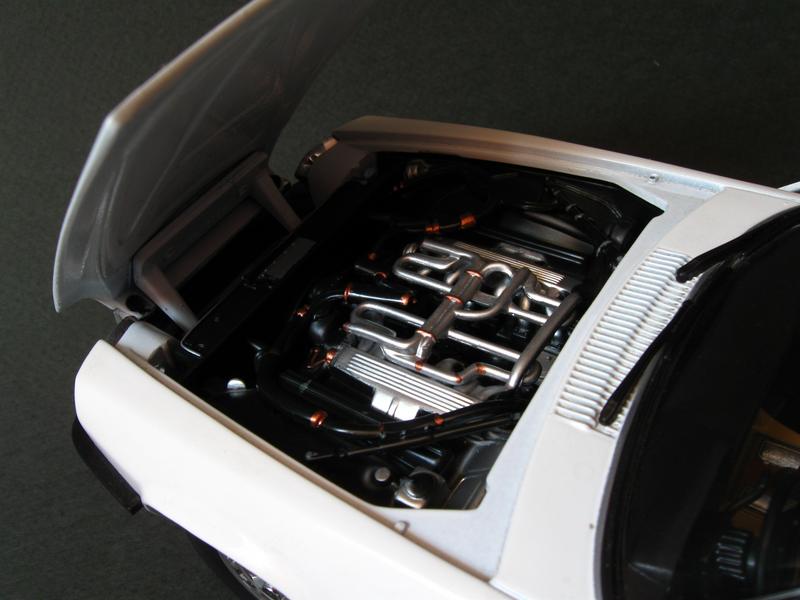 The XJS features an opening engine bay and doors. Sadly the trunk doesn’t open. The hinges on the doors are realistic and the front lid also opens correctly to the original.
The engine bay is very decent for a model in the budget range. It features a full radiator, some wiring, other basic parts and way down deep an engine block. 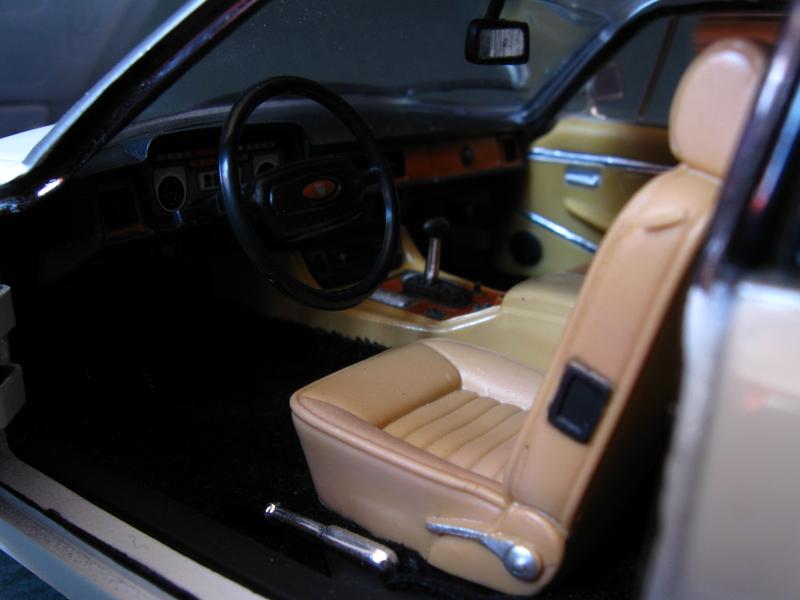 And now the interior. It features nicely modeled seats and dash. The steering wheel is also well done. Sadly the center console needs some extra detailing. There are no seatbelts and the door panels are a bit plain. The floor is uncarpeted but I’ve added it later on. 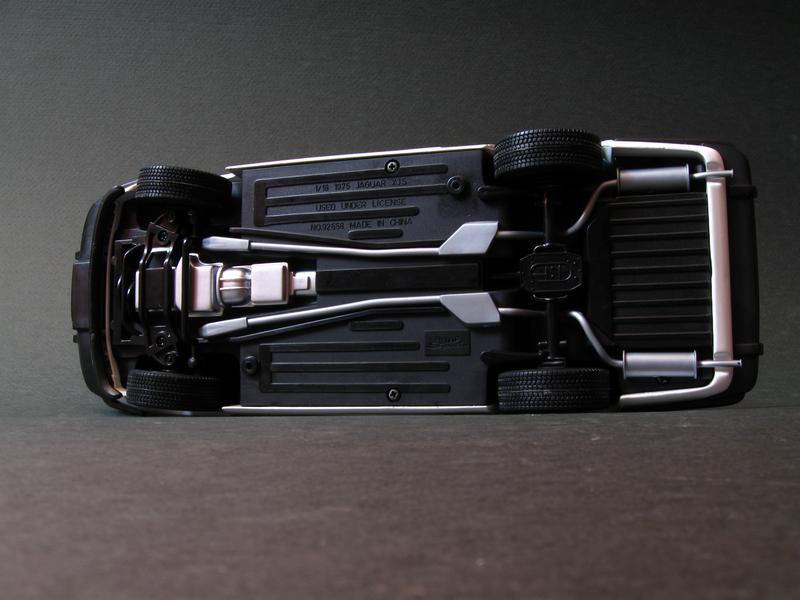 Underneath the model features an interesting blend of actual separate pieces that are in no way near close to resembling anything real than plastic chunks. If you’re going to go to the trouble of adding separate pieces and color them, at least model them properly, Yat Ming. 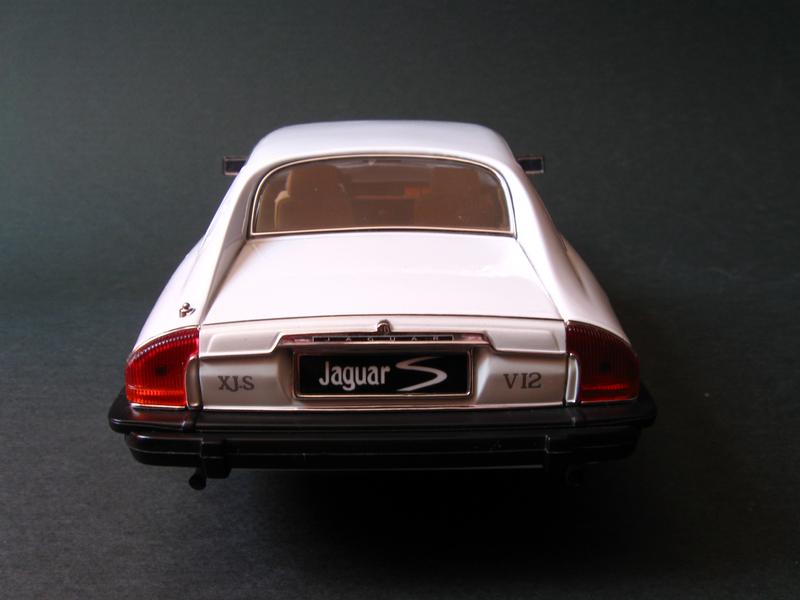 Overall the Yat Ming Jaguar XJS is a decent model. It is big and heavy. Feels solid and not flimsy. You get what you pay for but it still could offer a tad bit more for extra points. 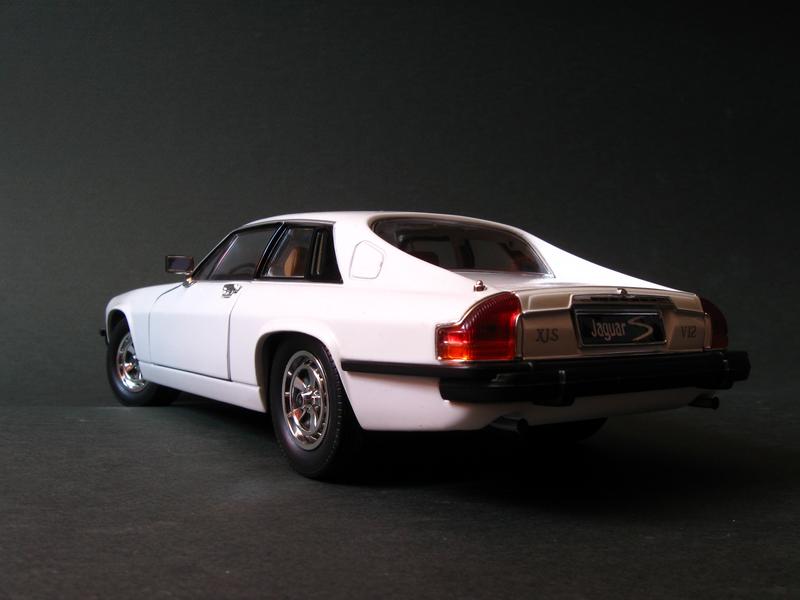 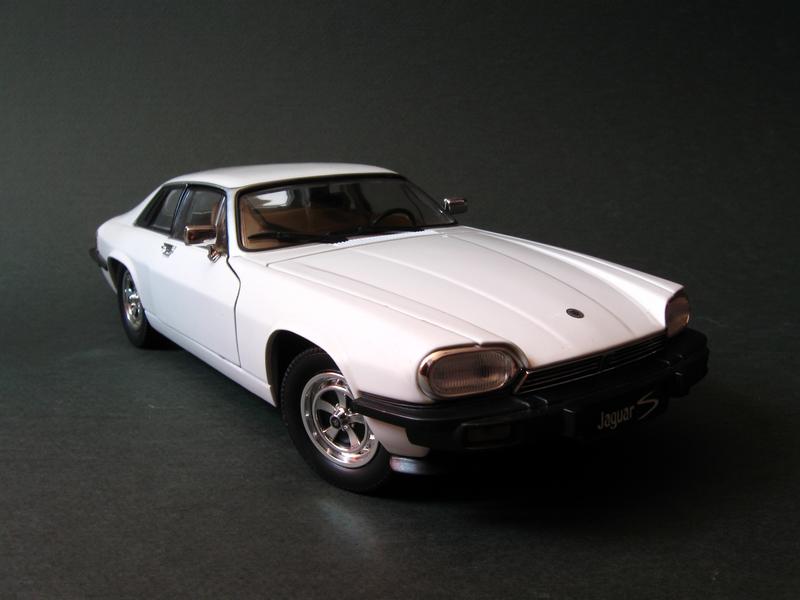 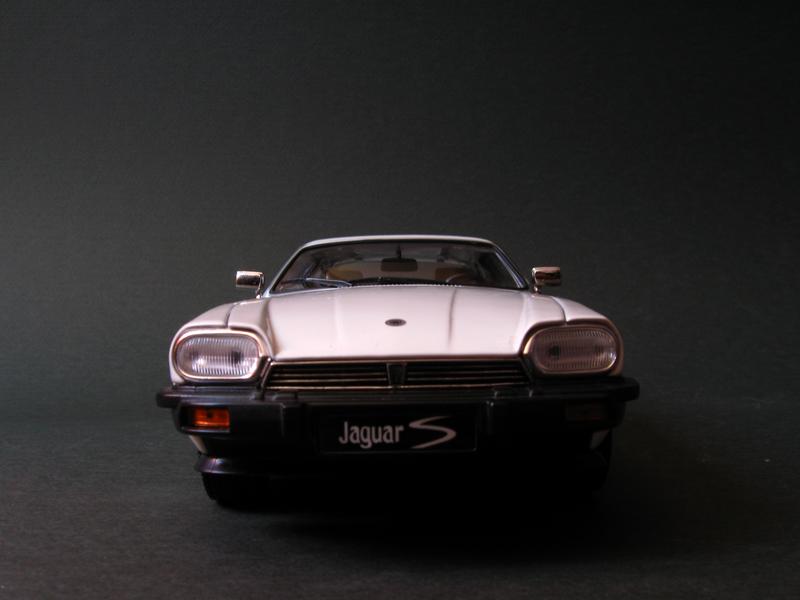