The Ferrari F40 is the all-time great supercar. It is a definition of what supercars are about. Because of that it is one of the most popular cars in the diecast world. There are countless of models of it in all scales and all price brackets. But not all are equal.

Take the model Kyosho made for example. It is easily one of the best if not the best. Kyosho were so proud of it they actually made two versions – one is of the stock model and the other one is a so-called “Light weight” version. 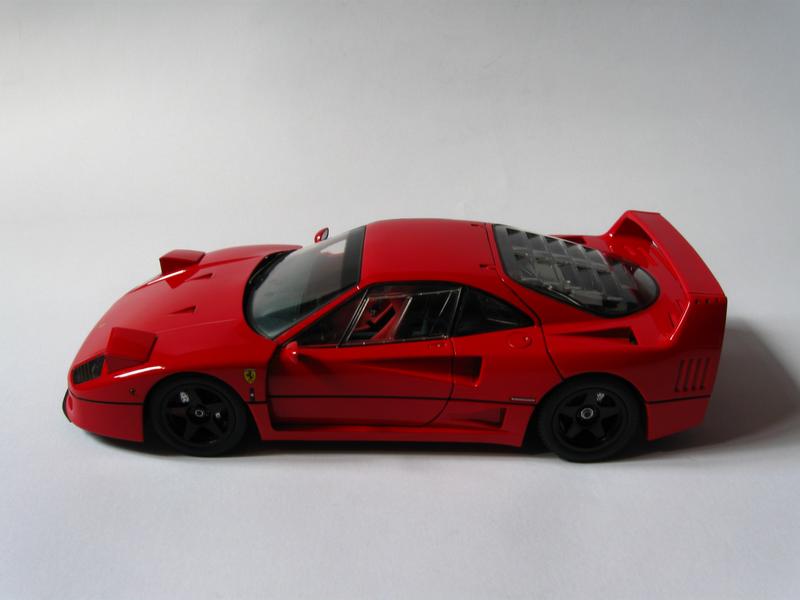 Let’s get this one out quickly. The “Light weight” (LW) model is a model of a F40 which exists but it is not really an original F40. It claims to be a stripped-out version of an already pretty stripped-out car.

It uses lighter rims, it has no spare wheel, the doors are fitted with plastic sliding windows and not real glass. There are also some small changes in the engine bay. And Kyosho has managed to feature them all. 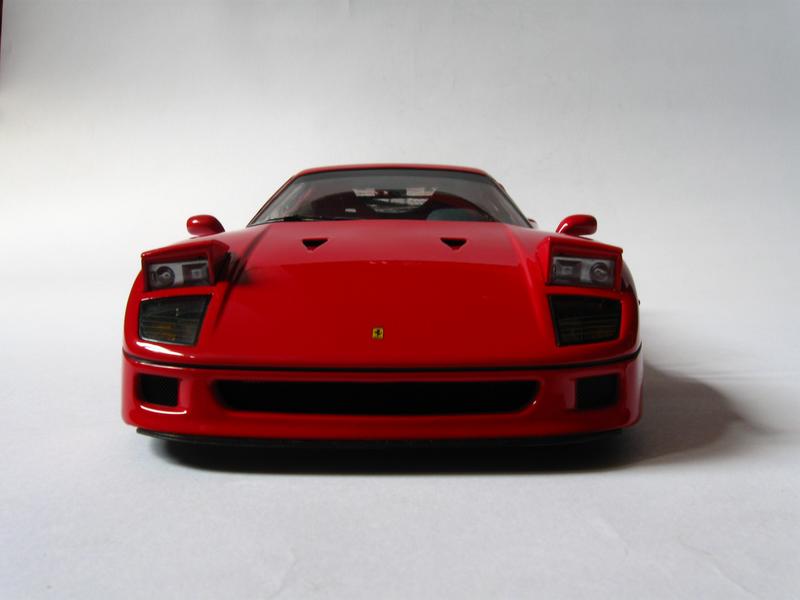 Some say the LW model is actually a model made after the first 50 F40s which were similar to it and the stock version was a model of the ones made later on which had some minor differences. In any way both models are worth it.

But before we get on with the model, lets take a quick look of the actual F40. It was the successor of the Ferrari 288 GTO (or just Ferrari GTO as it’s more correctly to say) and it was developed in the late 80s. 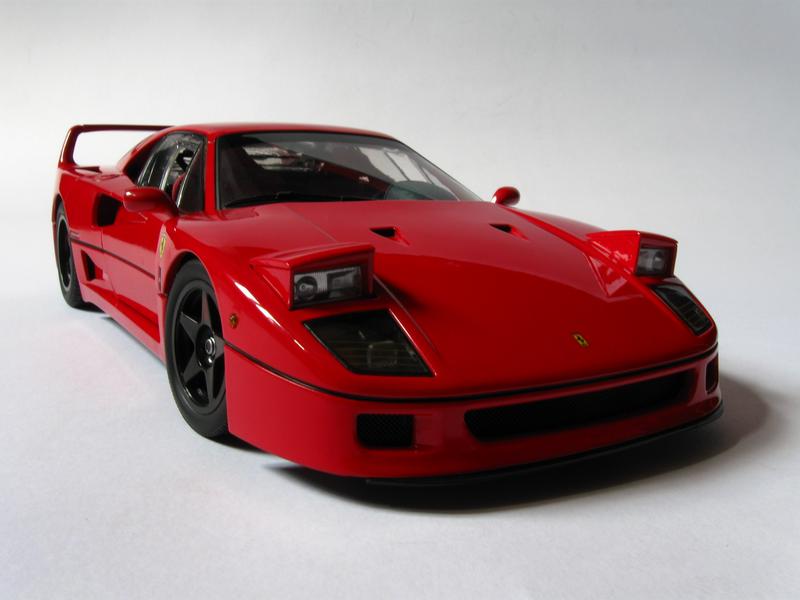 Production started in 1987 and continued to 1992. The name F40 was given to commemorate the 40-th anniversary of Ferrari. Enzo Ferrari, the founder of the company, wanted the F40 to be his last and most ultimate project. And so it was. 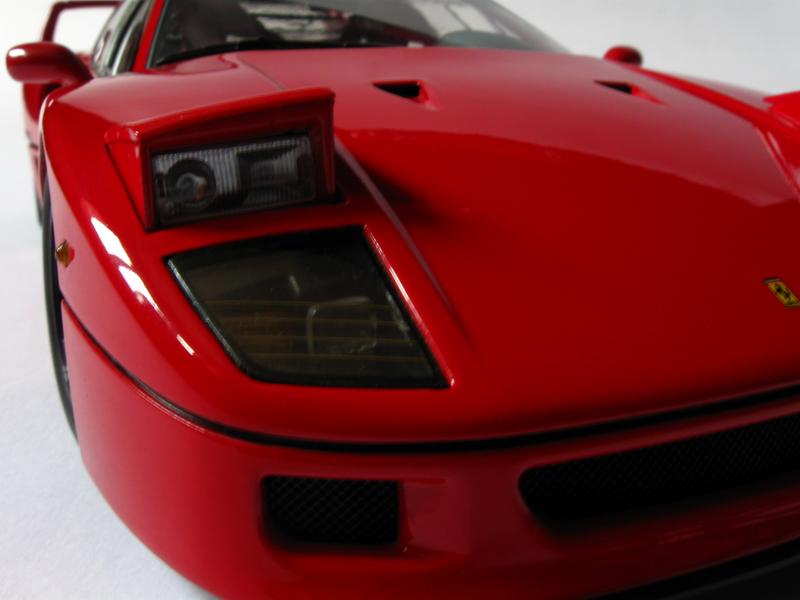 It is known that no two F40s are the same. Ferrari used it as a Research and Development project and constantly changed things on it to make it better and better. So while they all do look and perform similarly they all have their own unique DNA so to speak. A truly amazing and fantastic car which deserves a proper representation in diecast form.

And it has one thanks to Kyosho. It will take a two-part review to cover the model so we better get cracking.

The Kyosho Ferrari F40 LW grabs the attention from the first moment you see it. The scale is spot on, the shape is perfect and the panel gaps are very small.

I especially enjoy the way you can basically disassemble the model to a few major bits.

The front is perfectly made as well. Real metal grilles are used everywhere, the lights are also beautifully made. Underneath there is a small button which is used for the pop-up headlights which are very impressive as well. 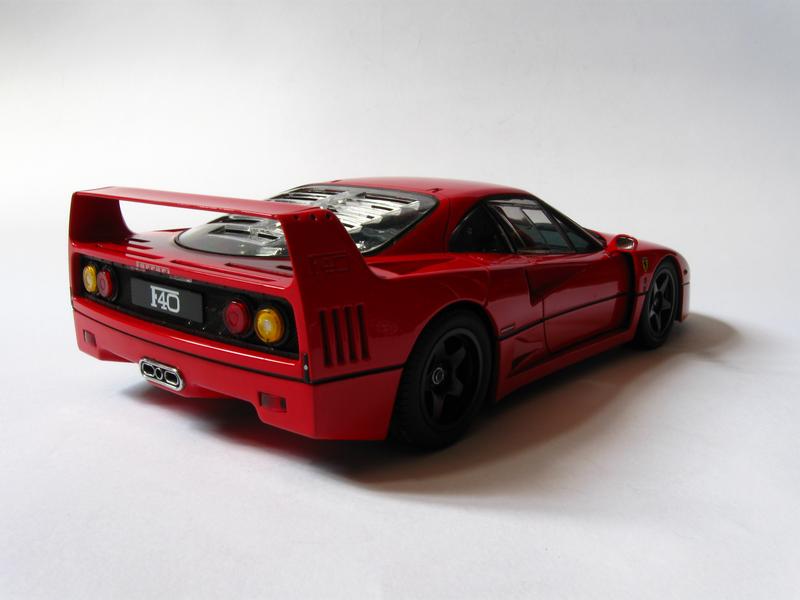 Around the back is a similar story, a big metal grille is covering the entire rear. The taillights are beautiful separate pieces. As is the exhaust. The huge spoiler is a separate piece from its sides. The letters F40 are stamped in the metal on one side of the spoiler. Lovely. 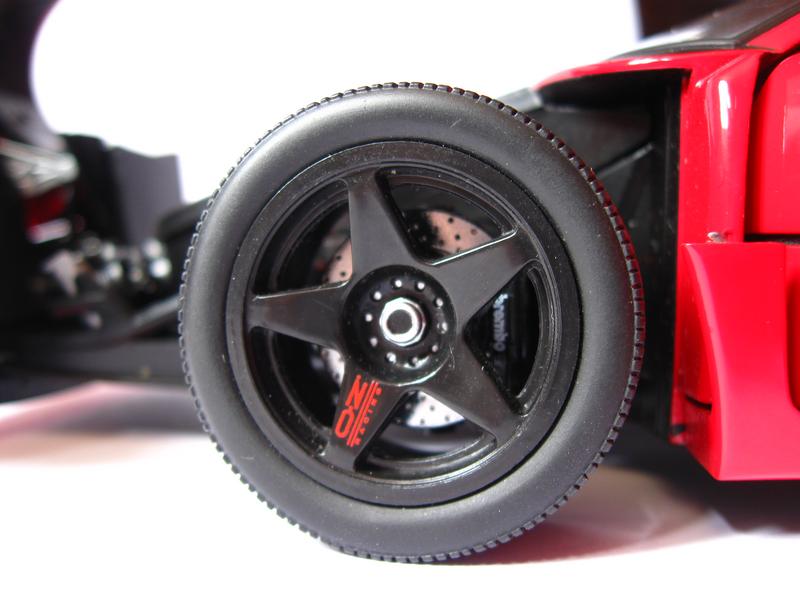 The wheels are very well made as well. The brake discs are perforated (not all the way through) and spin between the brake pads which are in branded calipers. 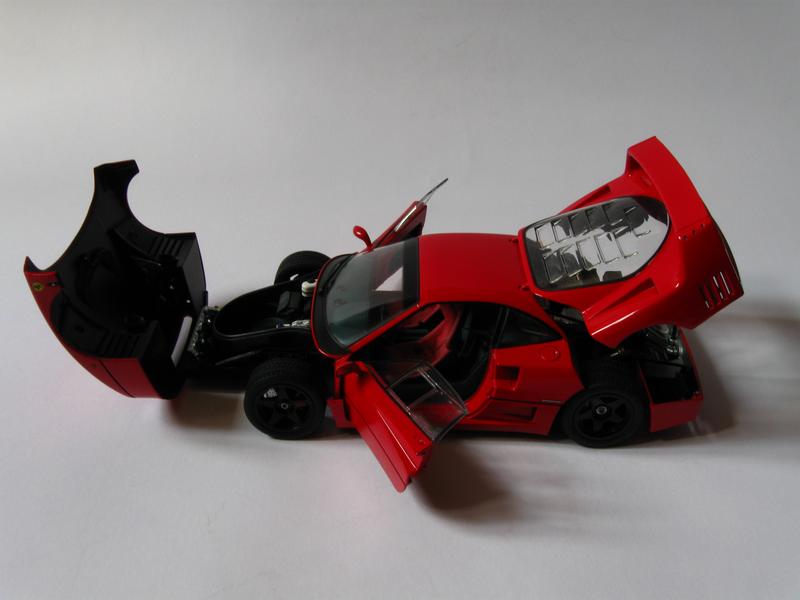 Now let’s open the model up. First we lift the entire front. It is mounted on hidden hinges and it reveals some of the finest craftsmanship on the model. Like the big grilles for the brakes to cool, air intakes, the radiator with two cooling fans and so on. There’s even a small rubber pouch which would be a few basic tools and a flat tire help kit on the real car. 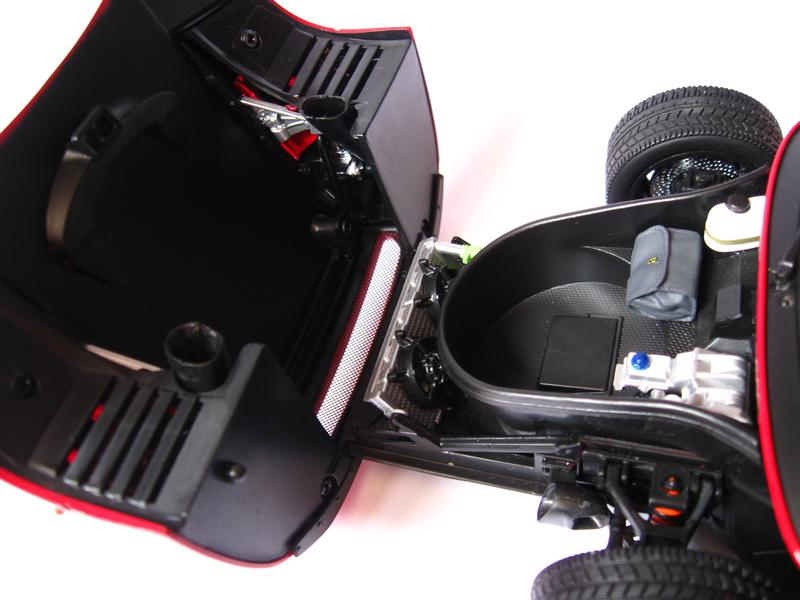 What’s even more impressive is the fully working and accurate suspension that Kyosho have used. Sadly it is made from plastic so don’t play with it too much just in case.
The front wheels are turning but the turning radius is very tiny and the tire actually catches on the wheel arch and lifts up the whole panel. So it’s best to keep the wheels straight which is unfortunate as it prevents you from making some cool pictures with the wheels turned. 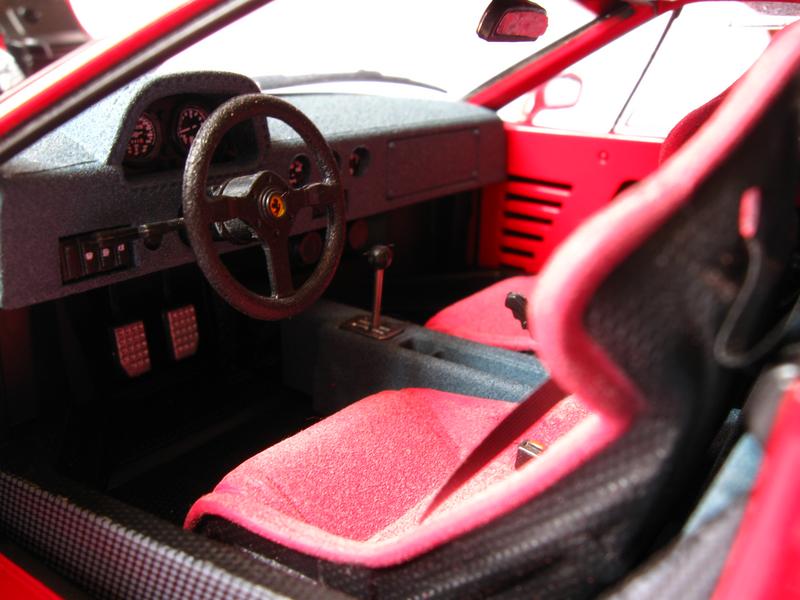 Moving on to the interior. The door gaps are pretty tight and there are no handles so you’ll have to use the hole in the window to open the doors. They are mounted on realistic hinges and will provide you with a great look to the interior. Here we can see that the seats, center console and the whole dashboard are covered with realistic texture. The seatbelts are also from real fabric.

One very cool yet subtle feature is the ability to move the seats. They are actually placed on runners and you can move them by pushing or pulling them at their bases. Very neat.
And now the best for last. The engine bay. Kyosho supply you with a metal rod that is used to prop up the enormous bonnet but you’ll have to find another place to keep it as there isn’t one on the F40 LW. 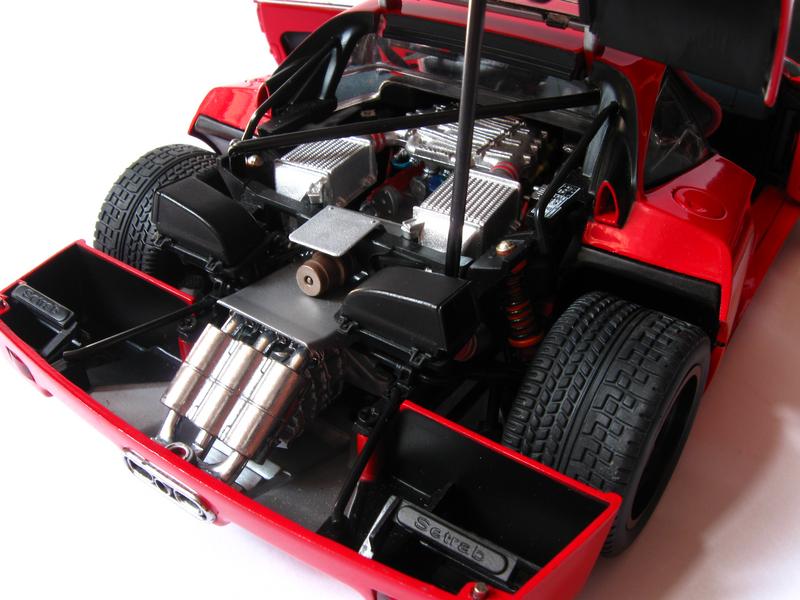 The engine itself is a small masterpiece. Both the real one and the scaled one. If you look close enough you will see the cables for the spark plugs and other small, subtle and cool details. There are some labels that are printed on one side but are so fine you’ll have trouble reading them. The fully working rear suspension is also visible as are the gear box and the exhaust system. 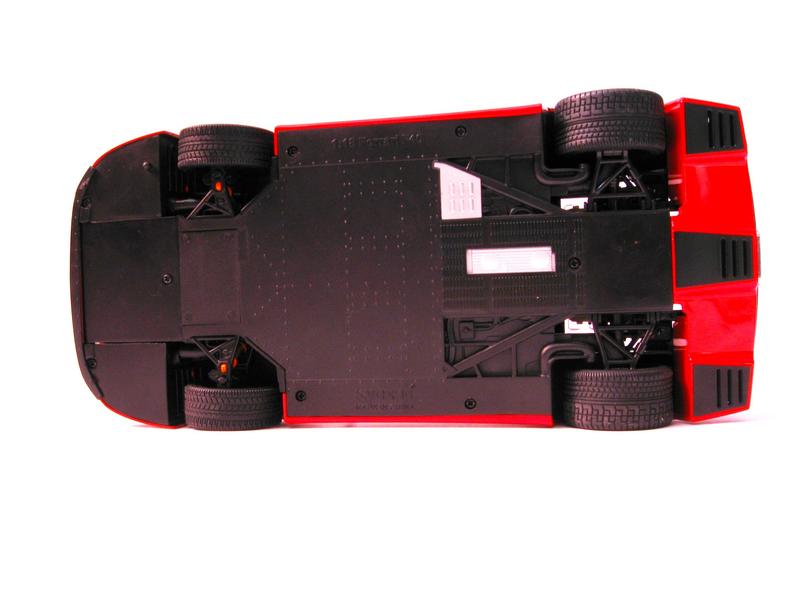 On the underside of the model there’s nothing much to look at. It is all completely covered by panel. Kyosho have actually tried to stamp in some bits but it would be better off to have panels there as well if you’re not going to put some finer detailing. 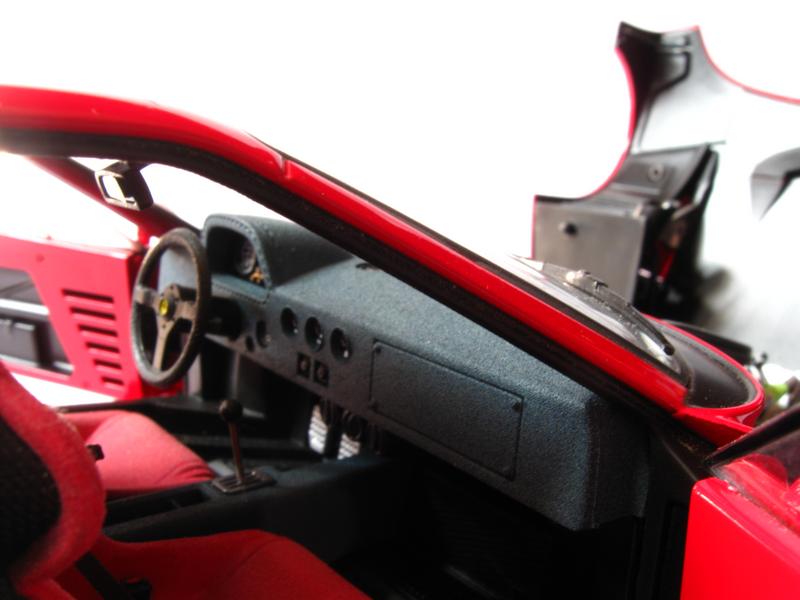 Overall the Kyosho Ferrari F40 Light weight is one very impressive model. Sure there are a couple of faults but they are something you can live with and won’t even care about (like the lack of details underneath for example). It is no wonder why these models are getting harder and harder to come by these days.