The Chevrolet Camaro is one of the all-time great American Muscle cars. It first came out way back in 1966 and lived for four generations up to 2002. Then it went away.

But the fans demanded that the Camaro is revived. Four years later Chevrolet presented a new concept model of the Camaro. It was a brave step forward in the design of the car. And it was very well received.

The concept is powered by a 6-liter V8 engine developing 400 hp. It is paired with a 6-speed manual transmission and of course rear wheel drive. This is also the first Camaro to use fully independent front and rear suspensions. The car was slated for a 2009 release and it kept the schedule with only minor differences from the concept version.

The production version is offered with several engines, trim levels and optional extras. They all keep the most important thing though. The looks. The Camaro has an astonishing stance that impresses everyone.

This stance is very well captured but JADA’s model. Even though this budget model has it’s issues it deserves some attention. Especially if you prefer the looks over the absolute precision.

Let’s get the trouble out of the way. The JADA Chevrolet Camaro is NOT properly scaled. The model is actually a bit bigger that it’s supposed to be. It is longer, taller, wider and with bigger wheels.

But that is not necessarily a bad thing. It was done to make the car look as good as possible. And we buy the models because we like the real car and want to enjoy it in our homes, right? In that case, the slightly “modified” dimensions are helping it serve its purpose.

The next thing that attracts attention is the impressive panel gaps. They are very small which is a rare thing on a budget model. The paint job is also nicely done with no major flaws or orange peel.

The wheels are well placed and fitted. I personally like that they are bigger and a bit pimped. They could’ve been better made though. The same goes for the brake discs and calipers. They couldn’t fool anyone that they belong on a model, but at least there’s something there and not a big hole. 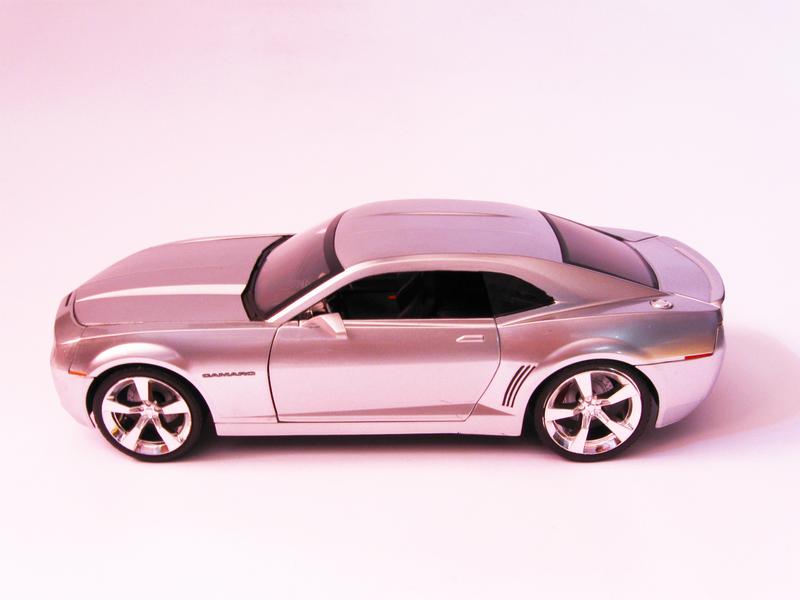 The sad thing is that both the front and rear wheels are on axels. This means the front ones don’t turn. The steering wheel inside does turn though, but that’s just for show.

The front grille is also something that could’ve been better made. Luckily it won’t bother you much when the car is on the shelf. The front headlights are simple, with visible stubs but do their job. 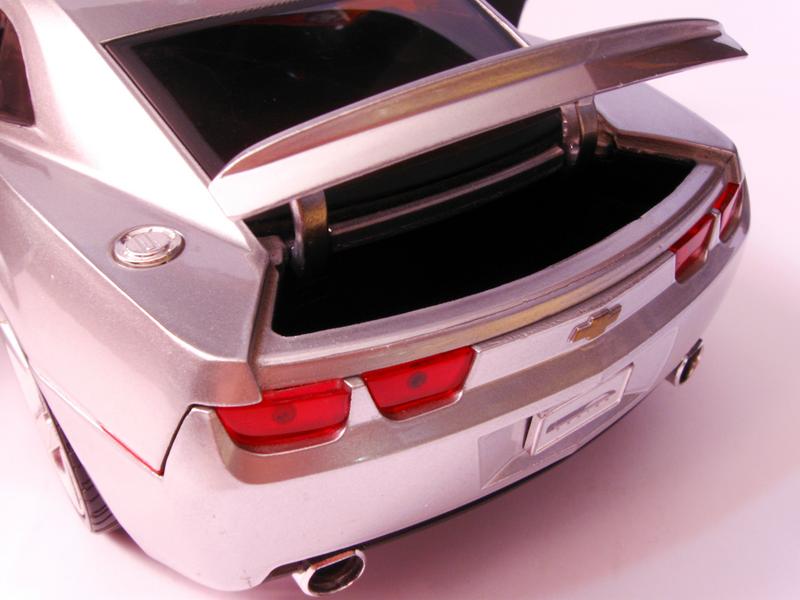 Around the back is a similar story but a tiny bit better. I for one don’t have any complaints here and quite like it.

What I do find amusing is the side rearview mirrors. They are, from what I can tell, made from rubber. It is amusing that you can flap them around like the ears of a dog. And they won’t brake of no matter what. 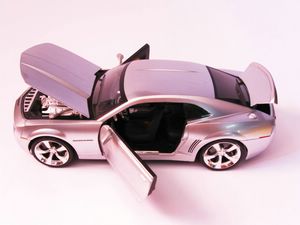 The model has opening doors, boot and trunk. Although the latter two are a bit… well, you’ll see. The engine bay is quite simple – an engine block, a strut bar and that’s about it. But 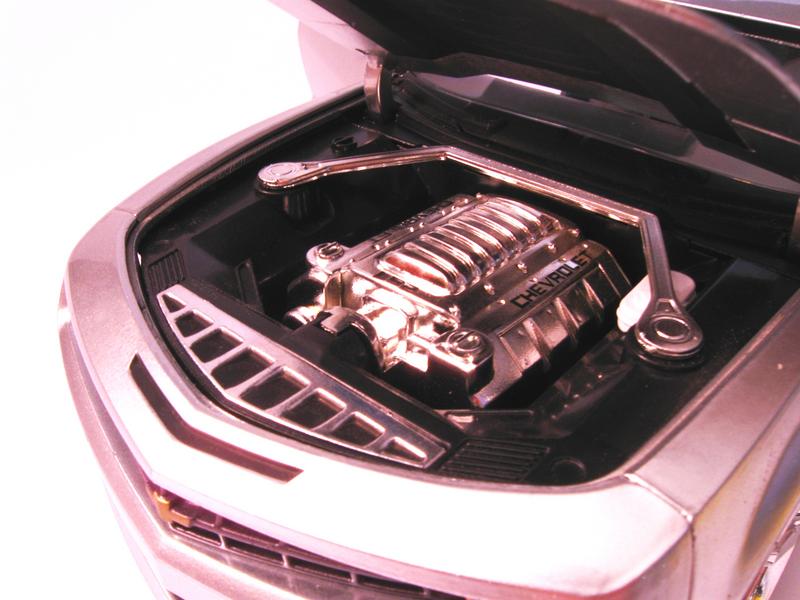 let’s not forget that the model is done after a concept car and usually they are a bit simple on engines. Ones that work at least. 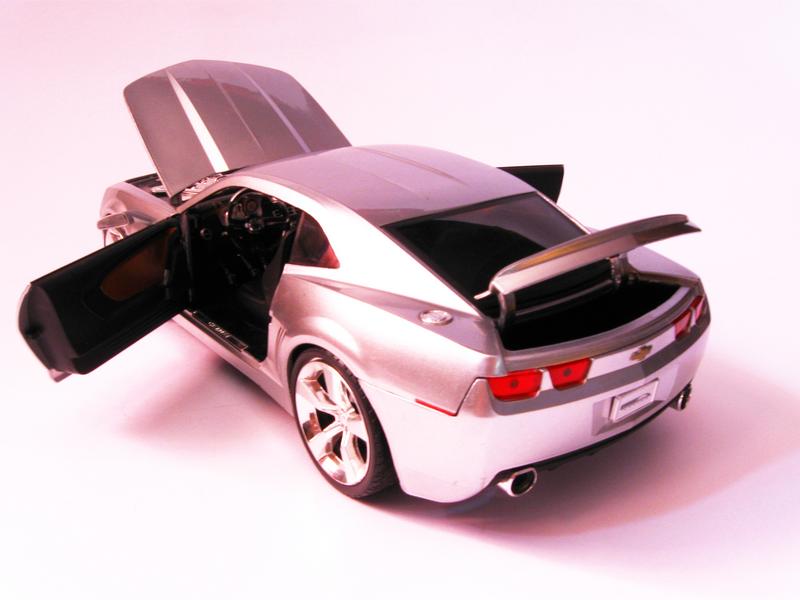 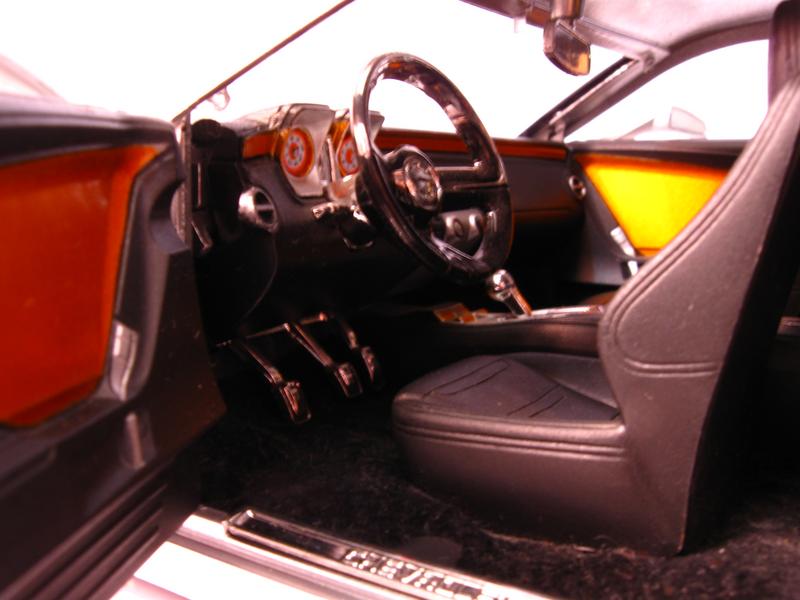 Onto to the interior. This is one place where JADA have done a good job. Maybe it is because the interior is not very difficult. Whatever the reason it looks very nice. The seats are well modeled, as is the dash. The center console and door panels could be better. We should point out that the doors are mounted on realistic hinges. 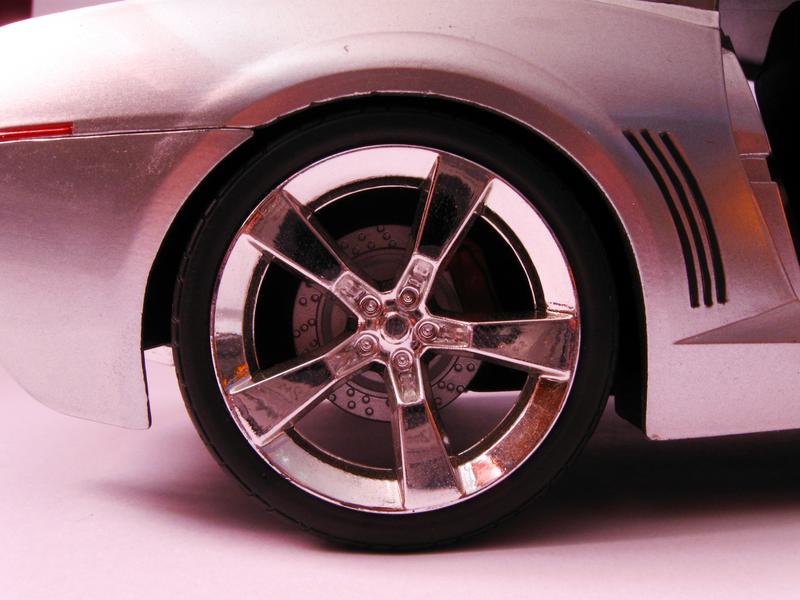 Underneath there’s nothing much too look at/for. JADA have made the exhaust system, rear differential, gearbox and other small details. It is a nice effort which is in the typical range for a budget diecast model. 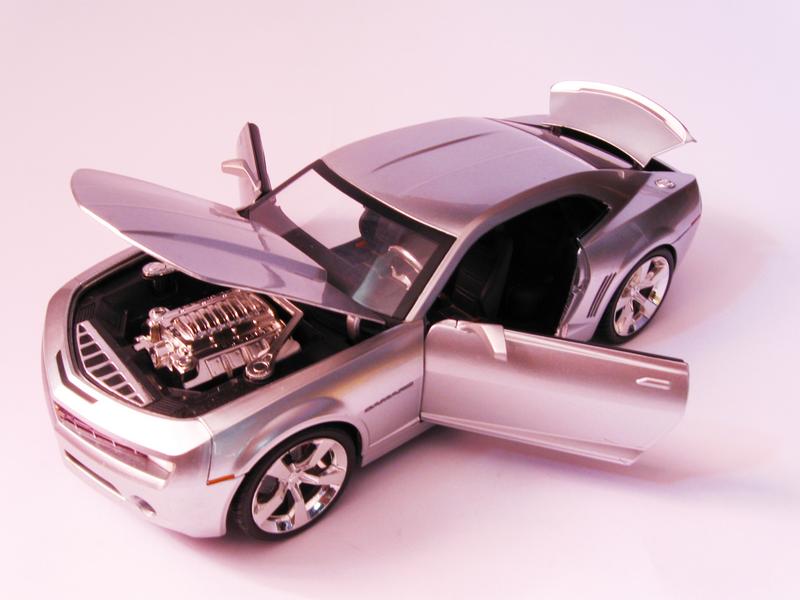 Overall the JADA Chevrolet Camaro Concept is a decent budget model. It doesn’t offer anything groundbreaking but it doesn’t disappoint on the things it has. If you like the real car and want to have it parked in your diecast garage, the model will do fine. It is also a great base for custom modifications.