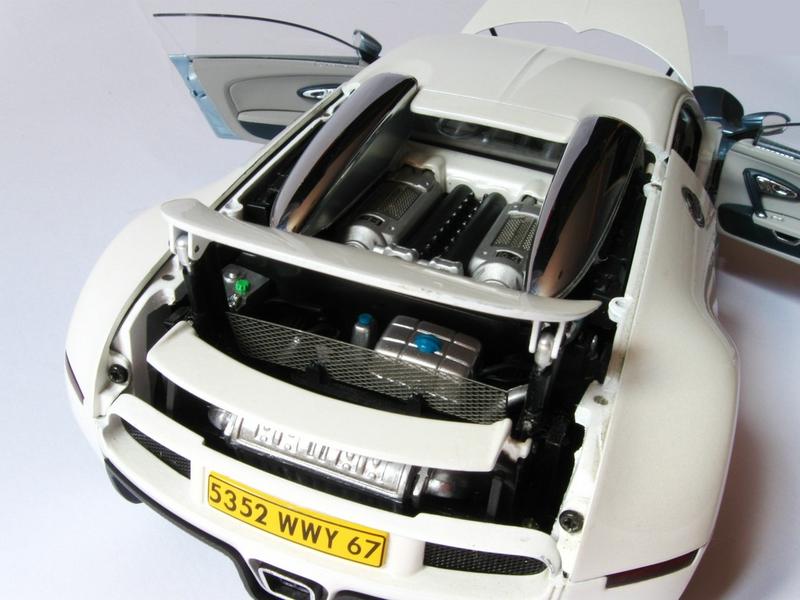 The AUTOart Bugatti Veyron is one of the best ways to own the most defining car of the first decade of the 21st century. Of course the best way is to buy a real Veyron but at a price of more than a $1 million and the crazy costs to actually run it, it is not the best idea these days. 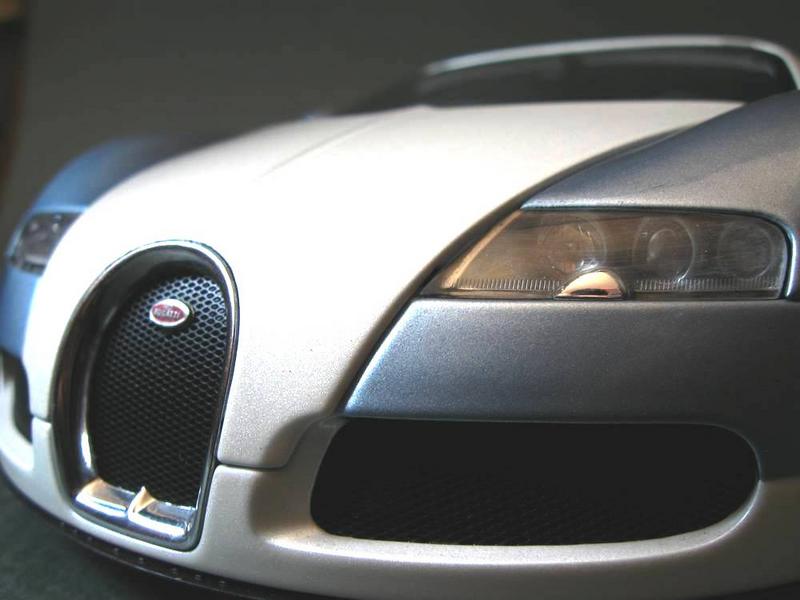 As the Veyron is so popular, there are lots and lots of models of it. The overall best though remains the AUTOart offering of the production version. The company also made the show cars that were used to display the model at various motorshows around the world before it was actually complete. We will take a look of the concept model in a separate review and here we will focus entirely on the production version.

But first a few details about the actual car. The car is designed by Volkswagen and produced under the Bugatti brand in France. The idea was to revive the Bugatti name and to make something that was thought impossible – a fully functional road car with 1000 horse power and a top speed of 400 km/h. 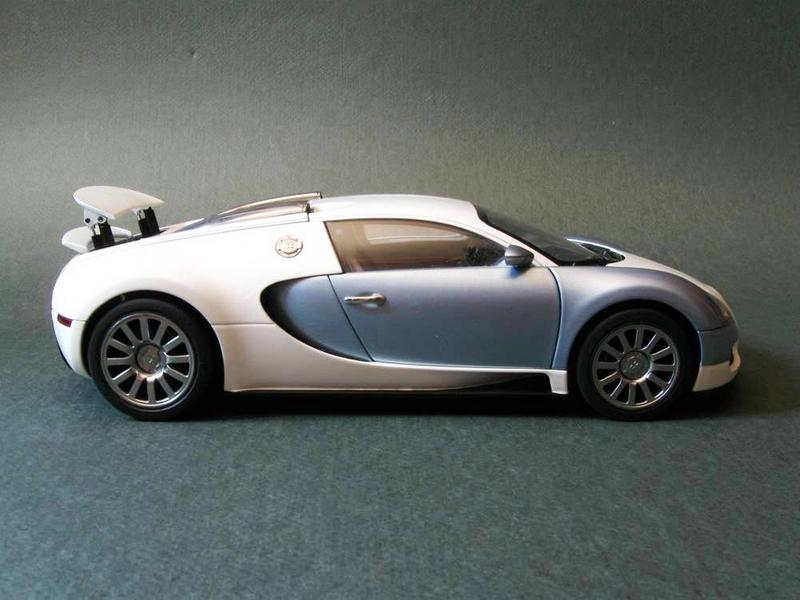 Despite the incredibly difficult challenges that these goals provided, after several years of relentless work, the car was actually finished. It is named after the French racing driver Pierre Veyron who was one of the best drivers of his time and naturally was racing for Bugatti. The concept cars had his signature on a special plate inside but that was omitted in the production version. 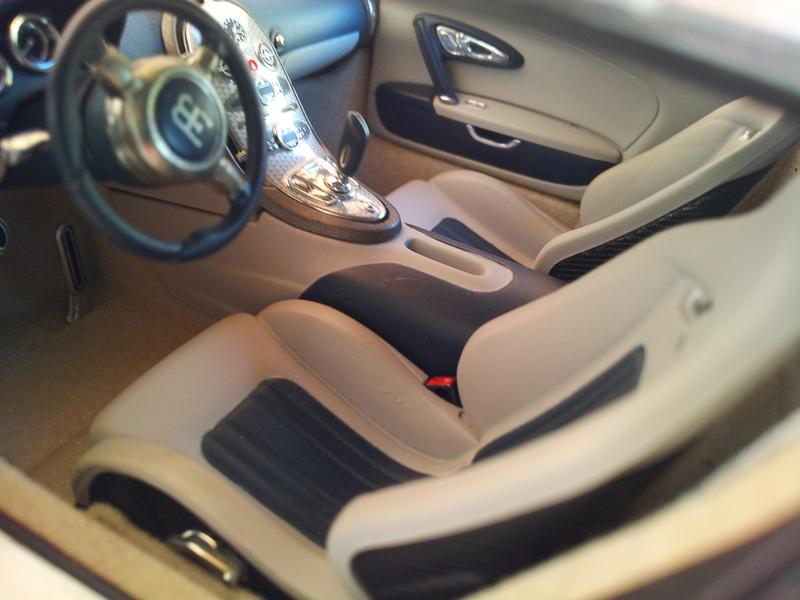 The car has an amazing 8-liter 16 cylinder quad-turbocharged endgine producing around 1001 hp (usually it is around 1020 hp but for marketing reasons 1001 hp is being used). It is basically two V8 engines fused together to make a W16 engine. Each cylinder has 4 valves for a total of 64. The torque is 1,250 Nm.

The power is transferred to all 4 wheels via a dual-clutch seven-gear direct-shift computer-controlled automatic gearbox which also allows for manual override by the driver.

There is a huge spoiler-air brake combo at the back of the car than usually operates automatically but it can be overridden by the driver in order to get to the top speed. The body of the Veyron also changes its shape during high speed driving making the car sit lower to the ground.

And before we move on to the AUTOart model, we’ll share a few more figures to dazzle you. A set of tires for the Veyron costs around €25 000. There is only one way to remove the tires from the rim and it can only be done in the factory in France. For this service you must set another €70 000. A replacement gearbox will set you back €120 000 actually fitting it into the car is not included in the price.

So you see why it is a better idea to go for the diecast which will be much, much gentler on your wallet. And even if you have a real Veyron (how about inviting us for a spin?) a model will suit it very well. We’ll prove it right about now, finally.

First the exterior. There is no other way of saying (actually writing it in this case), it is stunning. The dimensions are pretty much spot on when compared to the real car. The panel gaps and overall finish is also excellent. 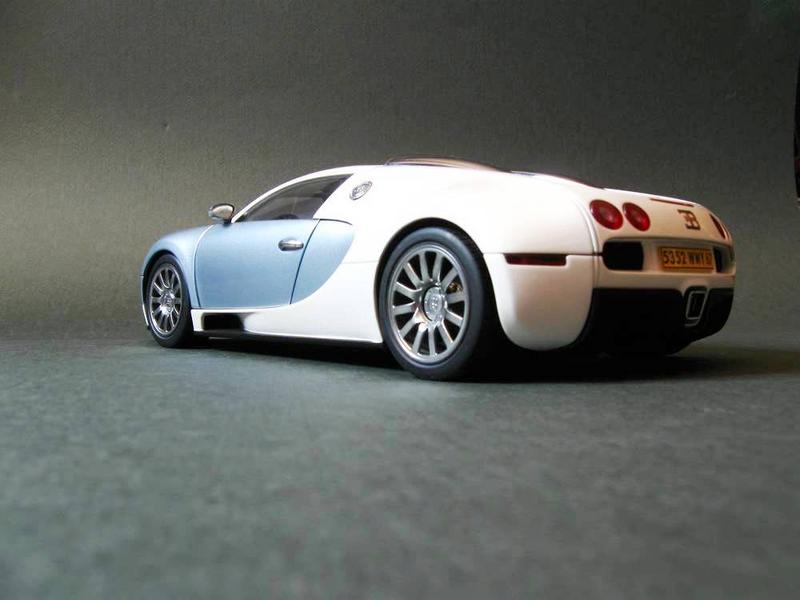 Real metal mesh is used for all grills even ones you’ll barely notice in the smaller nooks and crannies. There is also a smaller mesh around the central exhaust pipe.

The wheels are in typical AUTOart fashion and are beautifully made and are accompanied by dark gray brake discs intended to mimic the carbon fibre reinforced silicon carbide brake discs on the real car. Behind the discs are two hoses (one very tiny) and a fully working independent suspension made of metal. You’ll have to turn the car upside down to see these though.

The model features opening front lid, doors and a fully functioning spoiler which is a thing of beauty. The model also features a removable engine cover even though regular owners of the Veyron can’t do that as it is possible only in the factory. Or that’s what they say anyway.

Still it is a good thing AUTOart decided to include this feature as it offers us a peak of the astonishing engine bay. The maker has done a good job and it is a pleasure to look at the various components of the engine. This is made easier thanks to the magnifying glass that is included in the box.

On the under side of the car there is a small button that releases the spoiler. It itself is mounted on two springs so it is a nice idea to keep a finger on it so not to fly away someday. It may happen as there are a lot of tiny and fragile details on the model as a whole, so be careful with it.

Underneath the front trunk lid there’s not much to look at. Just an empty but carpeted load area and a couple of gas struts (well not with real gas but you get the idea) used to keep the lid opened.

One of the highlights is this subtle detail on the front windshield. I just had to mention it.

Moving on to the interior. It is fully carpeted, true to the original and generally well made. But it also contains a few disappointments. The first one is the rather cheaper look of the center console. The one on the concept model, made again by AUTOart is much more pleasing and intricate.

The bigger issue though is the omitting of a very key feature. You see, in the real Veyron, on the floor to the left of the driving seat, there are a few slots operated with the key of the car. With them you can lock the spoiler, override it and so on. These slots are missing in the model.

What is even stranger is that they were present, along with the hand brake, in the concept model. Maybe not that big of a miss for some, but is a prominent feature of the real car and it should not be missed by a top company like AUTOart.

Anyway we will live through it. Underneath the model doesn’t show much. Well anything in fact. But that is the way with the real Veyron as well. Still, AUTOart have made the whole plate out of metal and have stamped out the different plates and whatever details were possible.

Overall the AUTOart Bugatti Veyron is one of the best models out there. There are a couple of mistakes and issues with fragility but when there are nearly 200 individual parts on a model, a few relatively small mistakes here and there are normal.